The following are samples of work that continues through the  2019/2020 in-water work period for various south coast ports, marinas and other coastal property owners.

On March 11, 2011, we received a request from the Port of Brookings, Oregon, to assist in the response, already initiated by the Port Director, Mr. Ted Fitzgerald, to the effects of Japan’s devastating earthquake and destructive tsunami surges.

As wave surges had begun arriving and entering the Port of Brookings harbor in mid-morning of the 11th, Ted and members of his crew had already been working down at the docks for hours. Due to their early response, most of the commercial recreational boat owners had been notified, and many had been able to get their vessels out of the harbor and harm’s way.

Though it could have been much worse, serious damage nevertheless occurred that day at the Port of Brookings, the Port just southward at Crescent City, CA, and other Oregon Ports north of Brookings (e.g. Gold Beach, Port Orford and Bandon).

In addition to the destruction of numerous docks and piles, and some vessels, an estimated 30,000 cubic yards of sediment and debris had within the harbor of the Port of Brookings accumulated as a result of the tsunami wave surges.

Response had to be immediate. FEMA & OEM were of tremendous assistance. 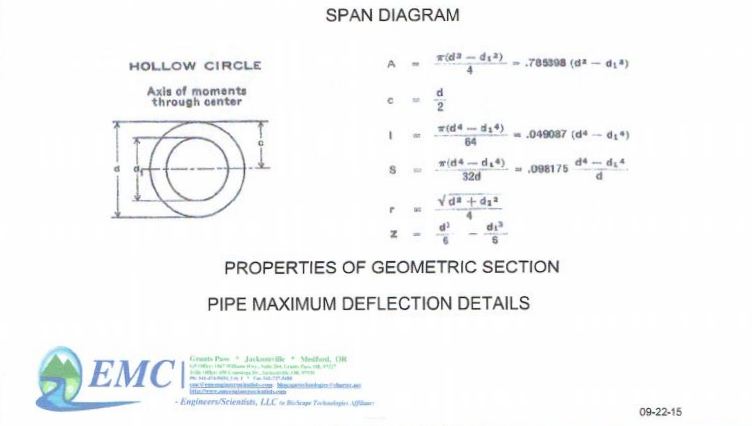 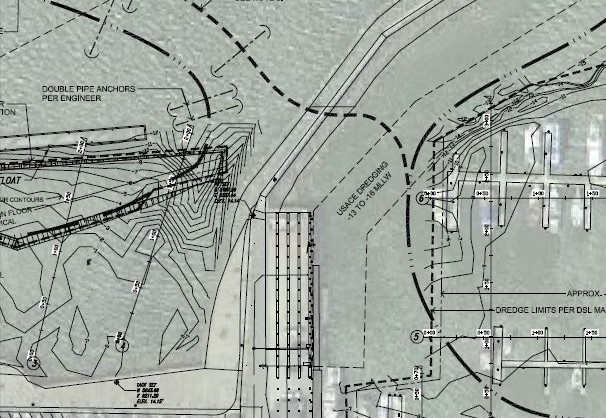 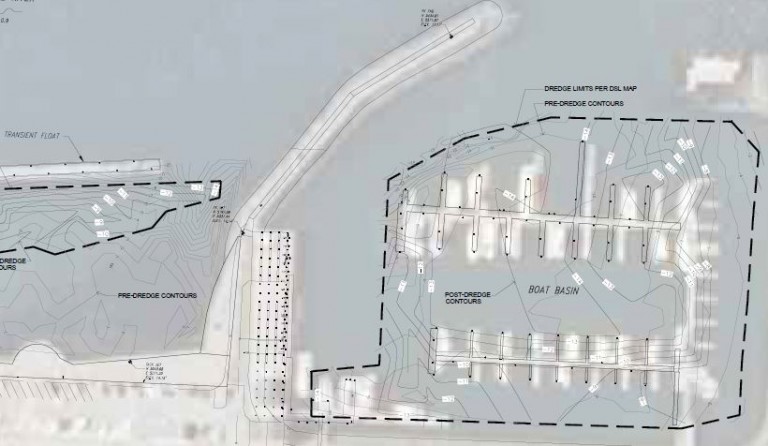 NOTE: THE TOTAL VOLUME OF SEDIMENTS REMOVED IN THIS EVENT, INCLUDING SEDIMENT THAT HAD SHOALED INTO THE PORT BETWEEN THE BASE BATHYMETRIC SURVEY (2013) AND THE DREDGING EVENT, IS APPROXIMATELY 31,600 CUBIC YARDS. 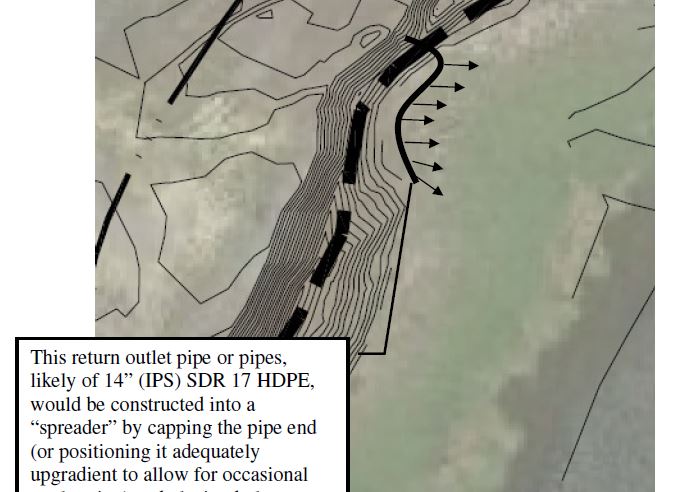 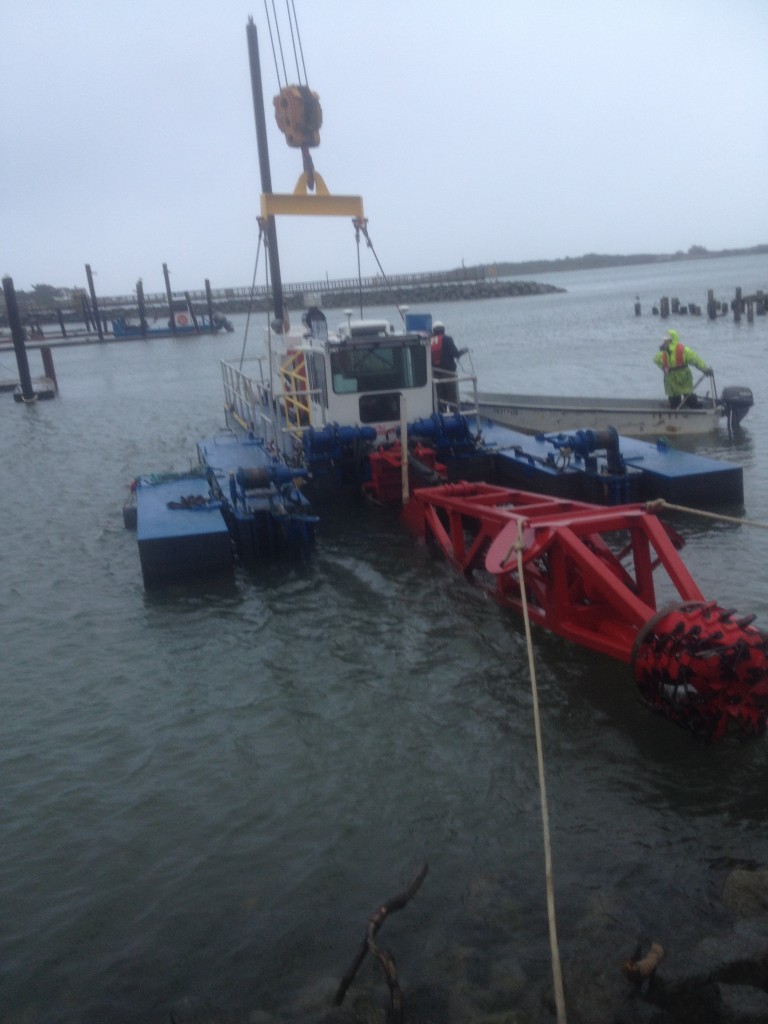 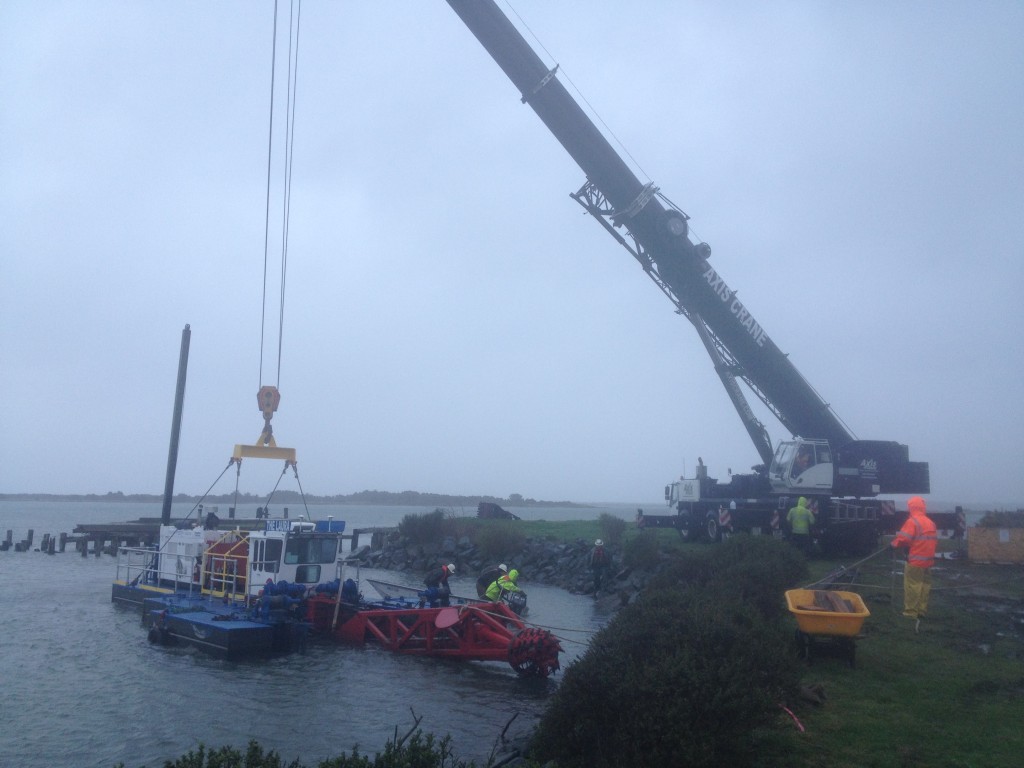 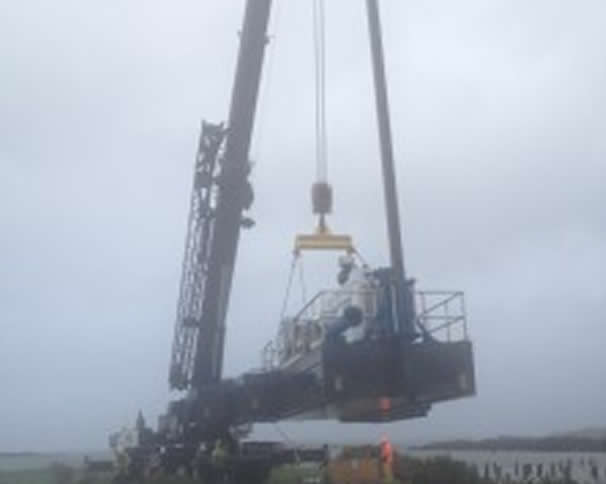 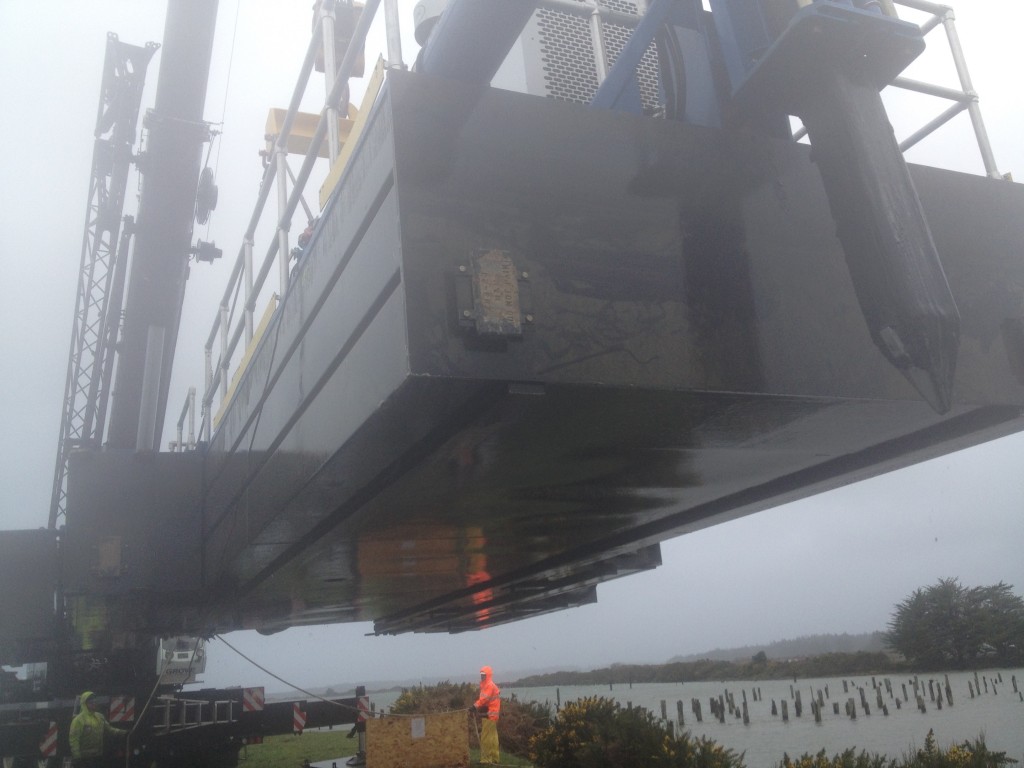 Dredge Placed on Trailer for Transport 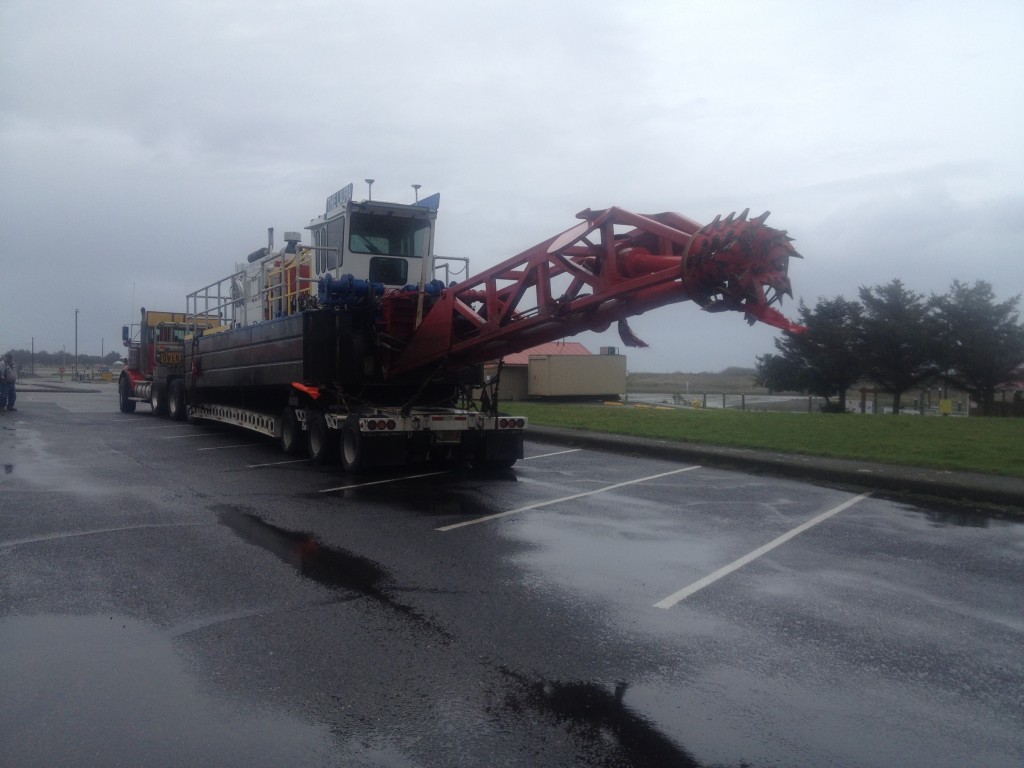 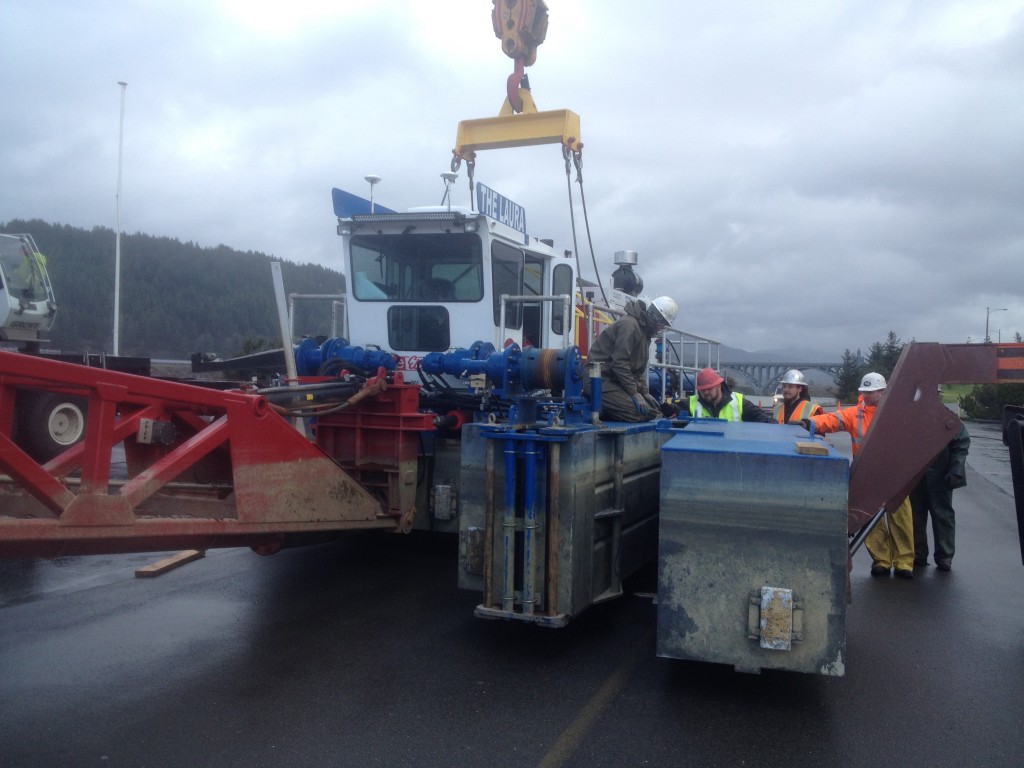 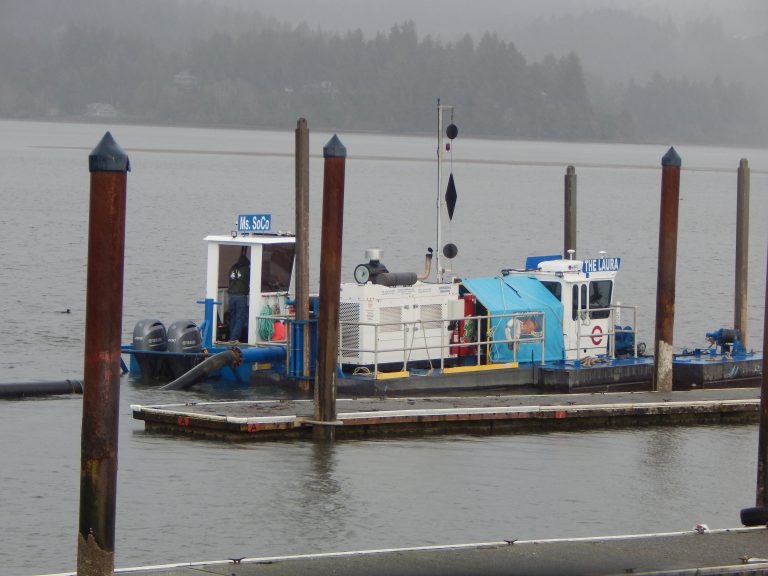 In December, 2016, dredging operations began at the Port of Alsea, Oregon. A 440 HP hydraulic suction dredge, with swinging ladder/cutter head was specified by EMC. 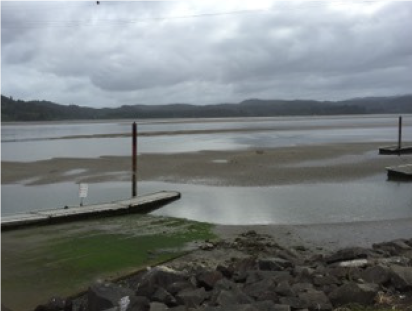 Some areas in the marina were so shallow at this time that one could walk onto shoaled-in sands and sediment during low tide. 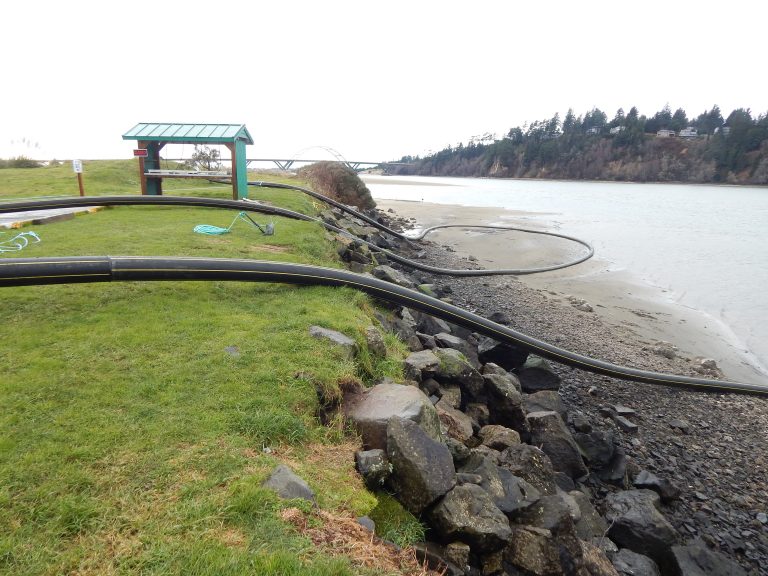 After analysis and bathymetric work had been completed by EMC, EMC demonstrated that the marina sands were Suitable for some nearby beach restoration. 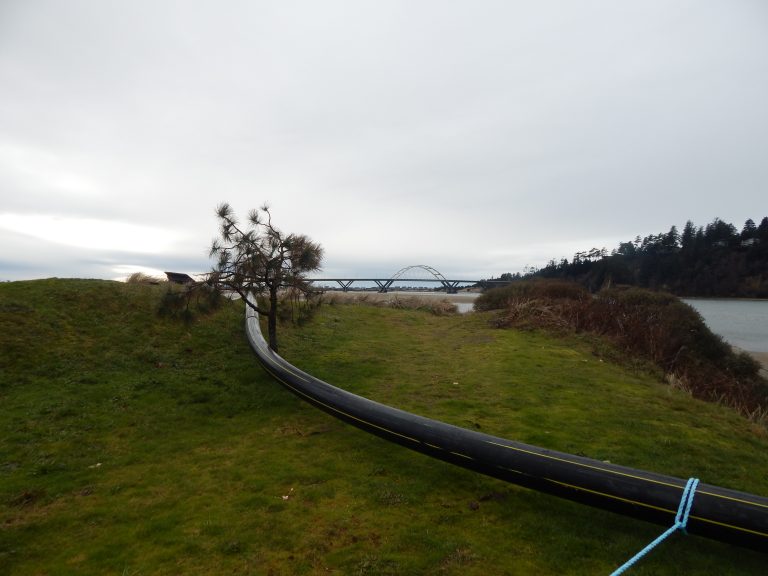 So a 10” (IPS) SDR HDPE pipe was welded and laid upland and in-water to a location approximately 3000’ west of the marina, to an eroded beachhead in front of homes… 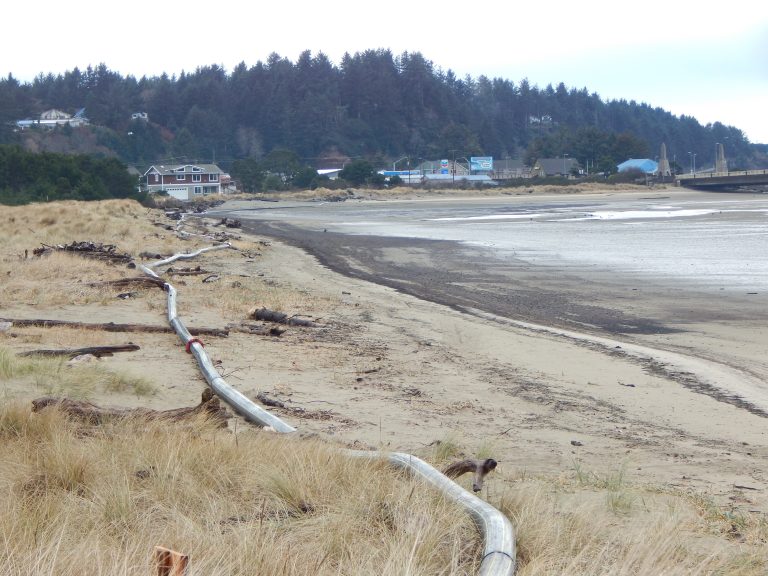 EMC determined that the dredge had adequate power to transport the sediment slurry (20-40%) through the pipe at a minimum of 9.5 feet/second, thus ensuring high enough velocity for this material to prevent clogging. After running through settling calculations, an end-pipe management plan was developed for this protective beach-building project. 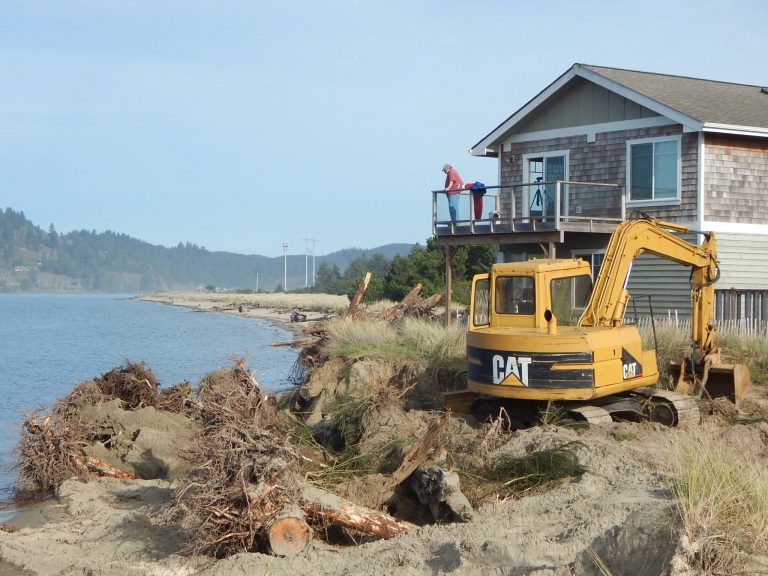 As seen above, the Alsea River/Bay had, during previous storms, eroded the properties of local residents, threatening structural integrity of building foundations. 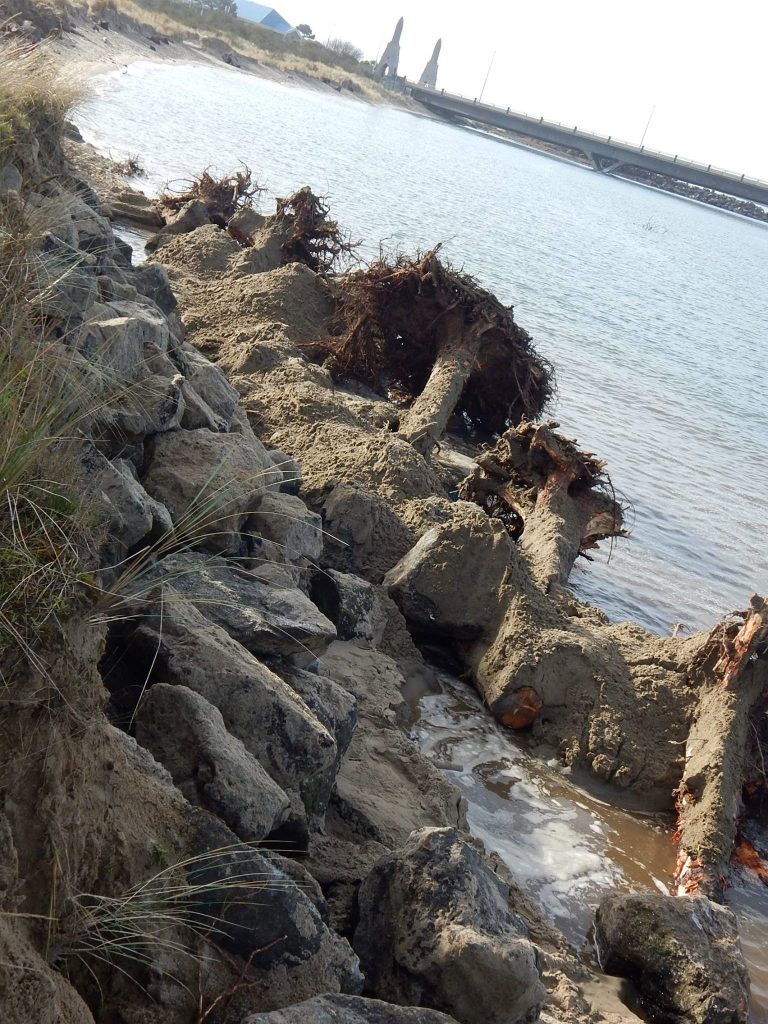 Looking westward along these up to seven foot high embankments, hard rock and tree section repair seen here had been made in the past. But these were failing. This photo and the one above were taken in early December, 2016. 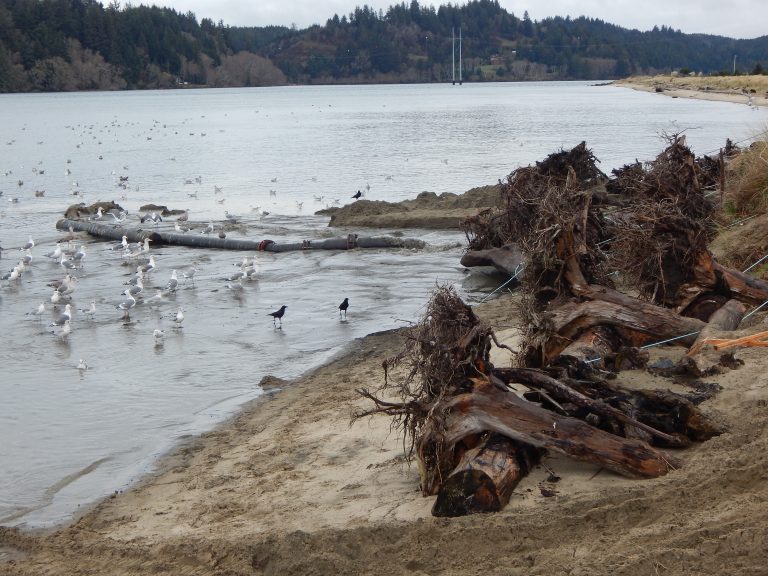 In early-December the end of the dredge pipeline was brought to the beachhead location. Turbidity protection was placed (turbidity curtain at first, followed by 10” pipeline) 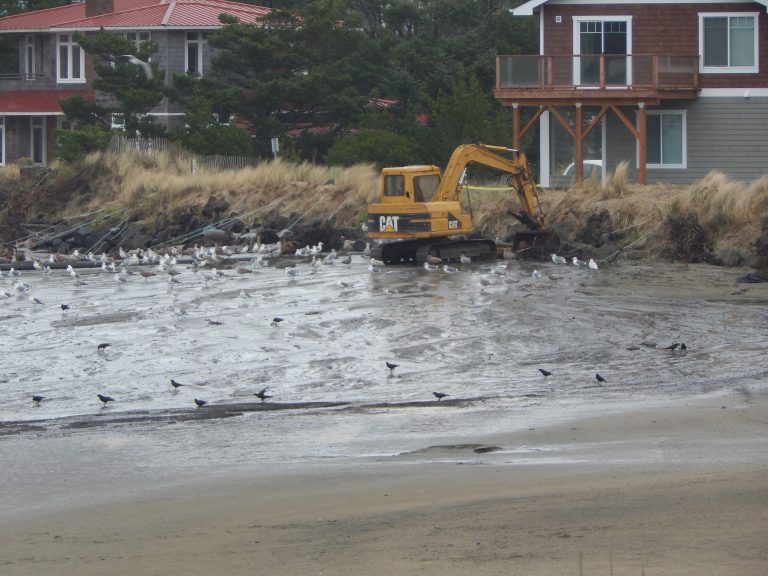 Sediment pumping was begun. The water seen in the photo above is not the River/Bay, but the first flows from the pipeline as we began to build the beach. The backhoe is used to hold and position the pipeline, and also to slow the sediment stream with its bucket. 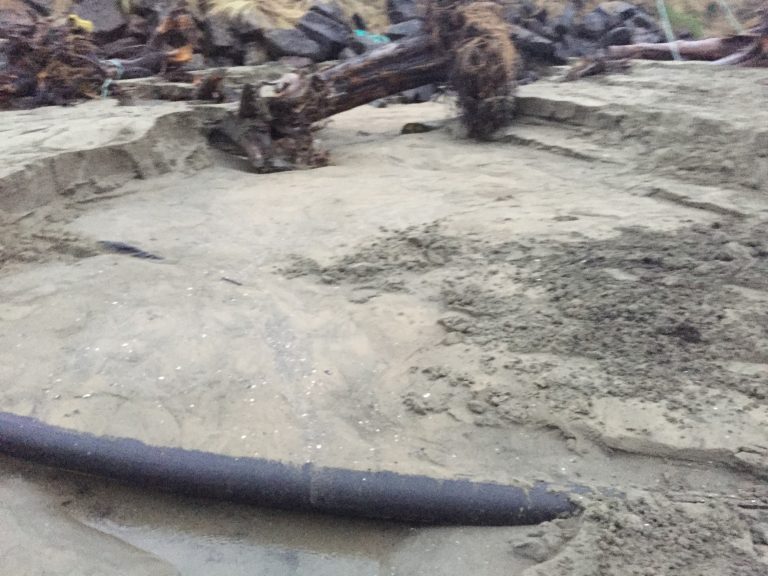 This photo was taken on 12/23/16, about twelve days into the project, showing how the pipe is being utilized to contain and accumulate sand in one area at a time. Here you can see in the background a log and root wad section with riprap behind it. The embankment, including the riprap toe, is about 7 feet above the beachhead at this time.

The above photo, taken one month later (1/23/17), shows the same area in the middle of the photo. The new beach has covered the log/root wad and riprap shown in the 12/23/16, and has brought the beach elevation to within two feet or so from the top of the embankment. 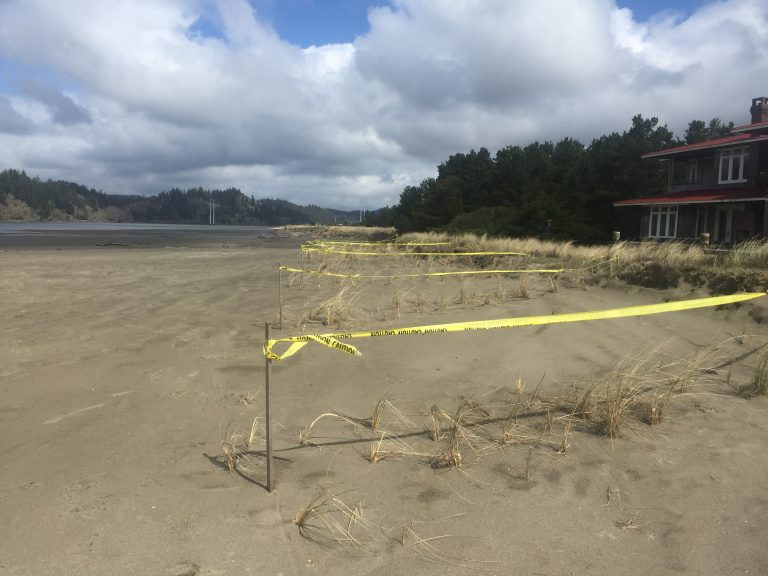 The above photo, taken in late February, 2017, shows about the same view as the previous photo. The beach has been given an additional elevation at its high point (closest to the homes) of 5 – 7 feet, gradually grading to high water about 140’ to the water, with an approximate width of about 700’. 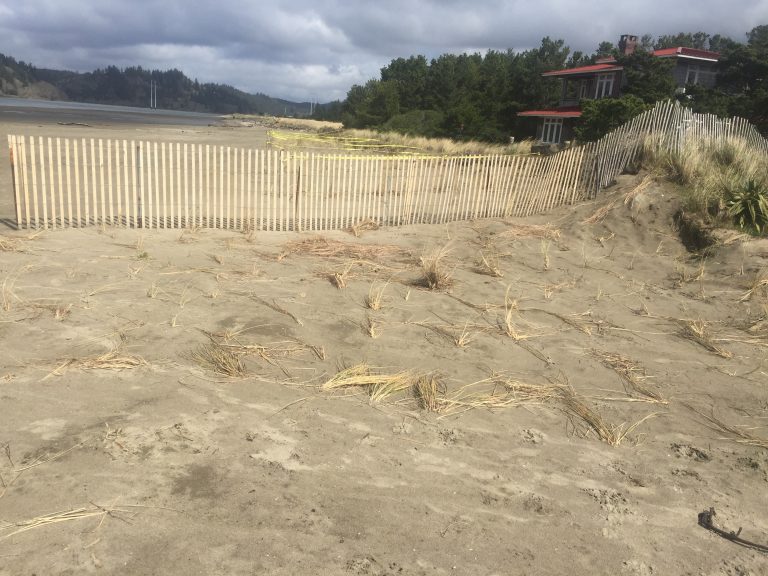 This photo, taken in early March, 2017, shows initial stabilization efforts being taken by the affected residents, including the installation of wind-drift fencing and beach grass. 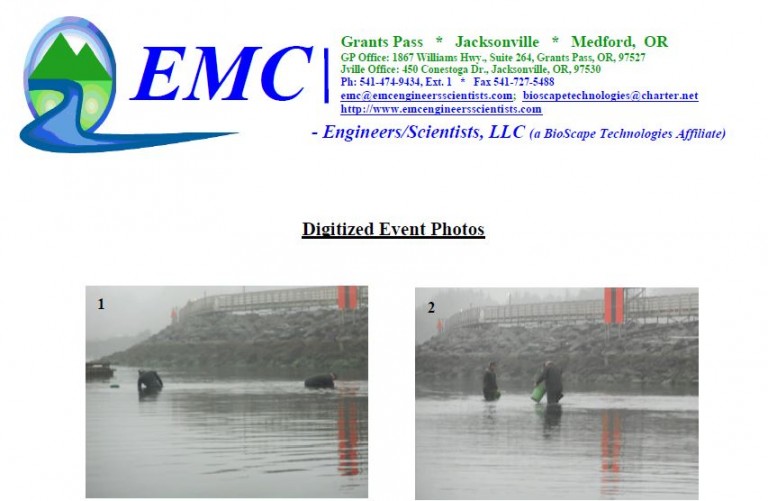 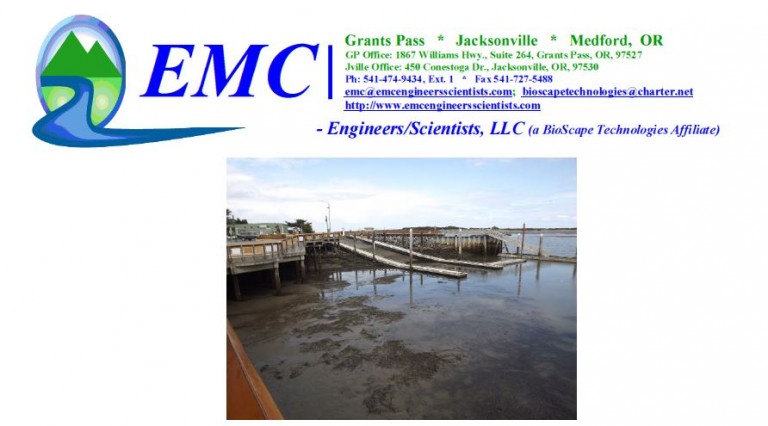 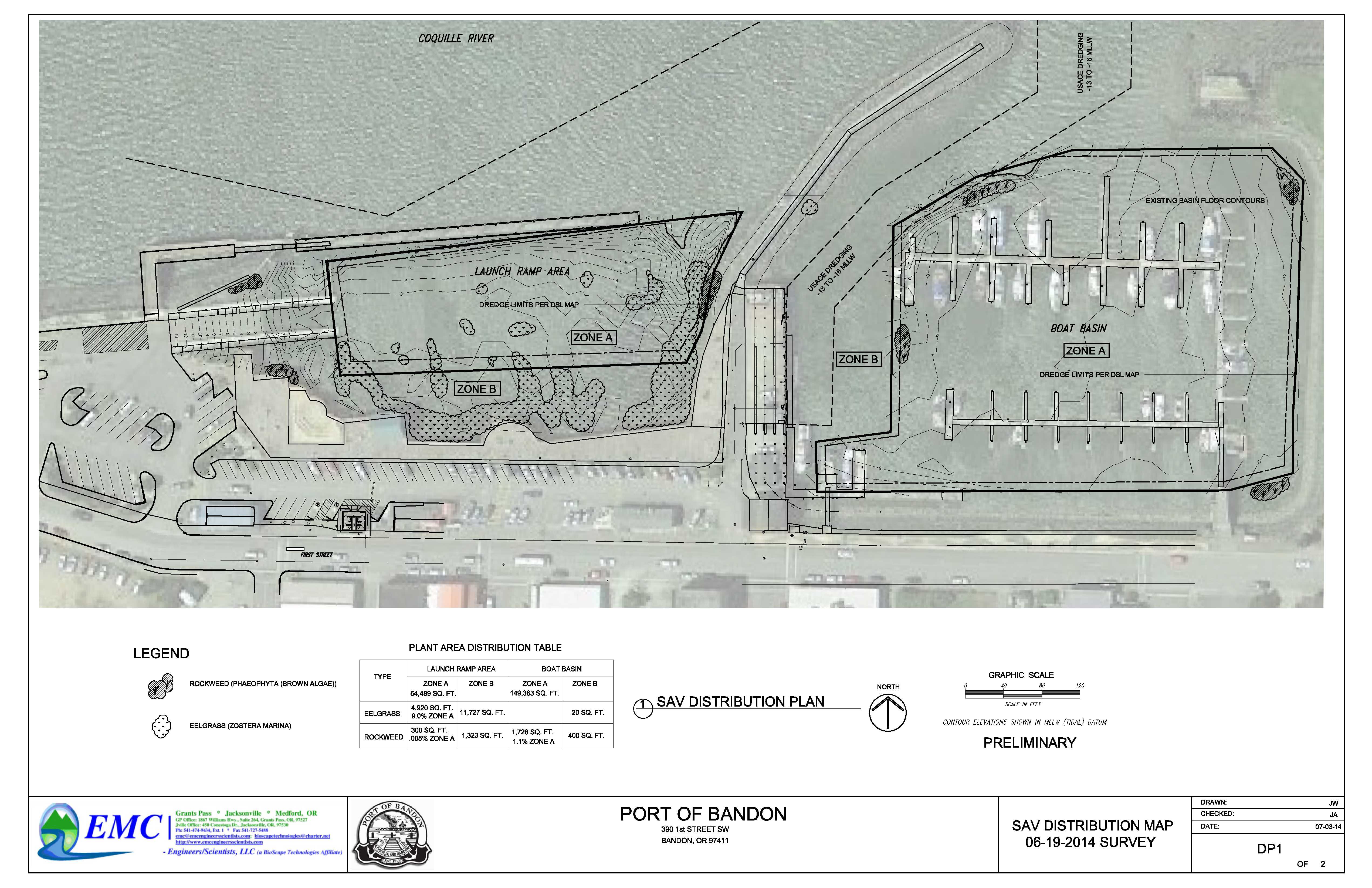 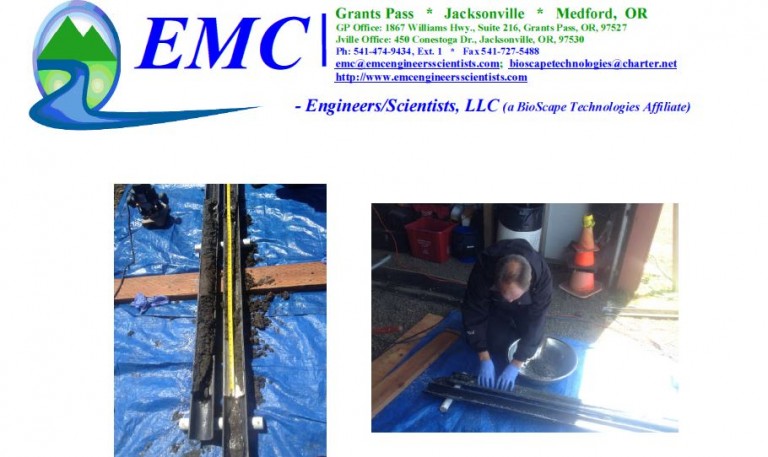 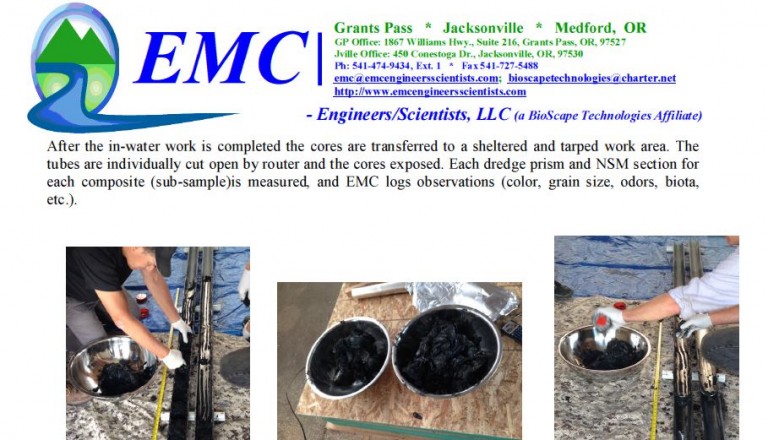 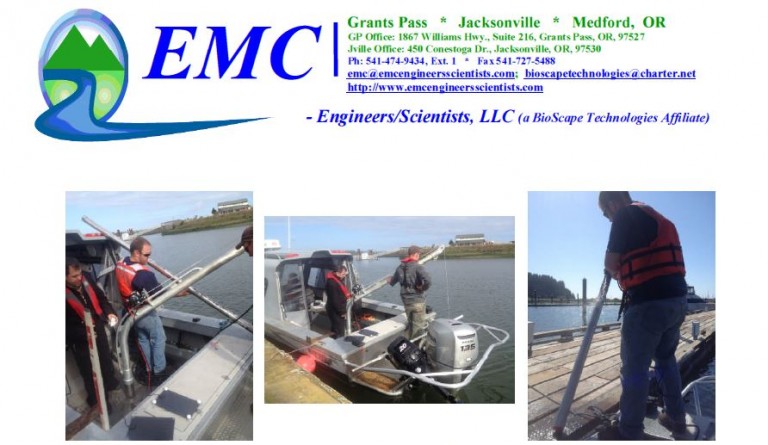